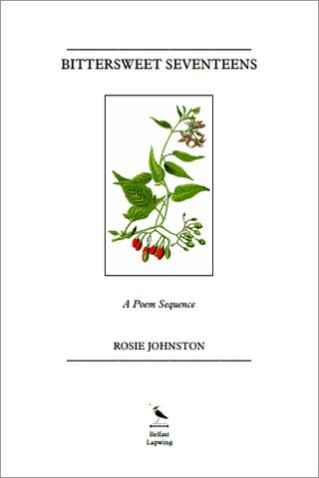 Dedicated with love to Rosie’s father, Roy (RR) Johnston (1924 – 2012), who ‘gave me life in so many ways’, Bittersweet Seventeens is a celebration of life in all its flavours. Rosie does not call her poems ‘Haiku’, though like Haiku in the western style they have seventeen syllables per stanza. Their closer cousins are Early Irish syllabic poems like Pangur Ban and The Voyage of Bran. Enjoy them singly or as a sequence.

Her heart’s a cannon ball, primed
shining,
a shiver could ignite it.

Love creeps soft as a moth’s thought,
darker
than tomcats’ breath, light as a dove.

Between past hells and future
heavens,
this moment poises sacrosanct.

It’s not often Dennis Greig of Lapwing Publications (Belfast) writes an introduction or note for one of his publications and Rosie is honoured that for Bittersweet Seventeens (2014) he took the time to include this:

THE GINGER JAR: A NOTE ON THE POEMS

The short form Haiku as a single poem evolved from a collective, group and possibly collaborative practice of composing poem sequences by Japanese poets, Basho being the iconic master of the form.

The Haiku verse form has its own defining and structural requirements such as the use of symbolic ‘seasonal’ words. Rosie Johnston does not call her poems ‘Haiku’, the only similarity between her poems and Haiku in the western style, being seventeen syllables per stanza.

Her literary interests include Early Irish poems; Pangur Ban, The Blackbird of Loch Lo, The Belling Stag and narrative sequences such as The Voyage of Bran being examples. Their brevity and concision appeal to her in spite of unavoidable problems of translation.

Although metaphorical and symbolic language is used in this and other sequences she has written, the reader is invited to read the sequence as a narrative. Immediate responses to the text should take precedence and over-analysis set aside, in the way we may respond to the beauty of a Ginger Jar without smashing it to see how and from what it is made.

Pangur Ban is an exquisite little poetic doodle found in the margins of a 9th century illustrated manuscript, translated here by two of Ireland’s finest poets.

The power of short poems is the resonance in a reader’s mind. That resonance can be utterly different from what the poet felt at the time of writing or could even have imagined. It’s what Barthes called ‘blind field’, the white around a photograph, the space around a poem. There’s no right or wrong way to fill it, it’s yours to enjoy.